In North America alone, home owners spend over $26 billion dollars a year on repairing damages done to their houses and property from extreme weather. Accordion shutters are a great way to proof your house against the threat of extreme weather conditions.

Sometimes called hurricane shutters, accordion shutters are a style of exterior window treatment meant to protect your windows from harm. They don’t look the classiest, but they’re meant to be practical, not stylish.

This article breakdown will give you an overview of what accordion shutters are, a few examples of popular forms they may take, and a helpful FAQ at the end.

Click the headings below to be taken to each section.

If you’re interested in installing window shutters or another style of window treatment, or you want information on how to begin your dream home renovation project, contact Graham’s & Son Interiors for information and even a FREE at-home consultation.

Some parts of North America, like the Caribean, Florida, or the East Coast, are at a higher risk of powerful storms and even hurricanes. Accordingly, the people who live in those areas need to protect themselves and their houses if and when these extreme conditions break out.

Invented in the 1800s, plywood was originally used to protect house windows in these hurricane-prone locations. Some families would actually store their storm-plywood in their sheds for the season and then re-install them every year.

Recently, the options available have expanded. You can get classic retractable shutters, clear polycarbonate panels, or even motorized shutters that can extend with the push of a button.

If you live in an area that has exceptionally high winds, bad blizzards, or is at risk or tornadoes or hurricanes, consider contacting a home renovations business near you to inquire about installing accordion shutters.

Another use of accordion shutters is to protect the storefront of small businesses.

You won’t see this in malls, but many small market shops or dense downtown stores will secure their storefronts with accordion shutters, bars, or sliding metal grates.

If you are a business owner, a large rolling accordion shutter-style covering, like you’d use for a garage, may work for you, but you may also want to ask about hardware specifically built for security.

Being eminently practical items, accordion shutters don’t look the best, but that’s because they need to be sturdy and protect the delicate parts of your house from dangerous weather.

The examples below are some common forms that accordion shutters can take.

If you want your accordion shutters to be permanent, they can be built to be opened and retracted to either side during the calm months and closed again when the weather gets bad.

You will have to go outside to close them up, and if you don’t use them for a long time they can freeze up or rust, and you’ll need to un-stick them.

Accordion shutters aren’t just for windows; they can work fine for doors as well.

This style is very similar to the first example, in that the shutters can be retracted to each side when out of use.

If you’re looking for something much tougher, consider looking for rigid panels you can use to cover your windows.

The panels in this example do not retract. In fact, they’re held to the wall through a mount that the panels are screwed into.

This is the toughest form that accordion shutters can take, although the homeowner will have to physically screw and unscrew these panels from their wall every time they want them moved.

These are best when you know rough weather season is coming up, and you can put them up and forget about them.

These aren’t technically accordion shutters, but they serve a very similar purpose.

The flaps normally sit flush with the wall of the house, but when you want to let in some fresh air, they can be propped open with some simple supports.

This type of exterior window treatment is best for rooms where you don’t want to be able to see out of the windows, such as in an attic, unused bedrooms, or garage. 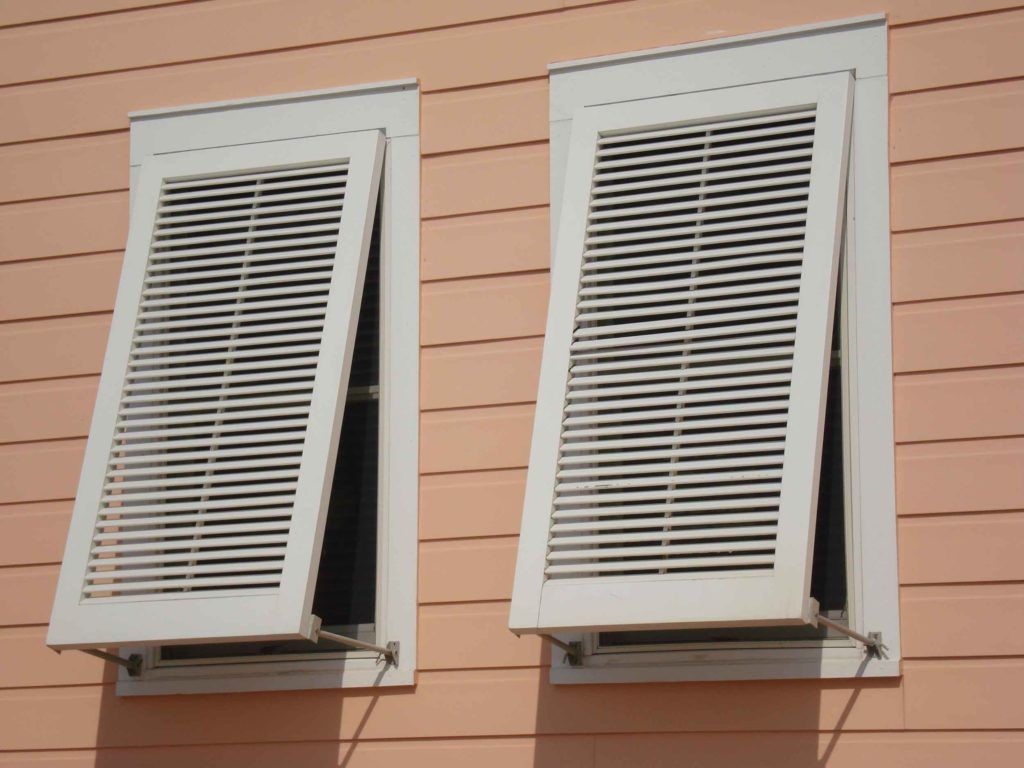 Below are some common questions home owners have about accordion shutters. Many home renovation companies offer free quotes, so we recommend calling up a business and getting the gritty details from them.

Q: How much do accordion shutters cost?
A: Accordion shutters can cost between $20 – $50 per square foot. An entire project may cost between $2,000 – $8,000. Factors such as installation difficulty, material, or location will all affect cost, so these prices may vary based on your local home renovation store. For more details relevant to you, call your local renovation store and ask them directly.

Q: How do I clean my accordion shutters?
A: For general surface grime, you can use a hose, but for more detailed cleaning you can use warm soapy water and a soft bristle brush or cloth. Don’t use anything too abrasive or rough, or you’ll risk scratching your shutters. To clean the track or locking mechanism you can try using a pipe cleaner. For serious cleaning or maintenance issues, call a professional company.

Q: What are some similar window treatments to accordion shutters?
A: If you’re trying to protect from storms or hurricanes, you can use plywood to protect your windows. If you want security, you can consider screens or metal grates.

Q: Where can I learn more about accordion shutters and window treatments?
A: There are almost innumerable options when it comes to different exterior window treatments. To see what’s available in your area, do your research, then call around to see what your local home renovation stores offer.

Located in North Cambridge, with over 40 years of experience, Graham’s & Son offers window treatments of all kinds, from rustic shutters exterior to delicate shades and blinds.

Whether you’re looking for window shutters or anything else, projects with Graham’s always begin with a FREE, conversational, no-strings-attached, in-home consultation.

We want to get the best idea of how we can give you the best product possible, and we want you to feel like your thoughts and preferences have been incorporated into our project plan.

For evidence of our past work, you can browse our gallery. Otherwise, you’re welcome to give us a call and we can start working on the home improvement project of your dreams.

“Amazing company to work with! We changed all of the blinds in our house with shutters or cellular shades. They had an amazing promotional offer which made the price incredible. They are very friendly and informal (this is a good thing) to work with. They installed the window coverings the same day the order arrived. We will be a repeat customer.”
– Blake M.

“We want to thank everyone at Graham’s and Son, for all of your efforts in working with us to ‘beautify’ our windows with your California Shutters. Service and communications have been professional, thorough and friendly, from start to finish!

We are thrilled with the dramatic change the shutters have made throughout our home! The installation was so quick. The finished product is amazing and we feel like we are suddenly living in another home!”
– Wendy B.