Shutters vs Blinds: How To Choose The Best One For You

Graham’s knows that the choice between shutters vs blinds can be complicated. In this guide, you’ll get the following advice to help you make the best decision:

1. Shutters vs Blinds: The Differences

2. Shutters vs. Blinds: The Pros and Cons

4. Shutters vs Blinds: What is best for you?

5. Shutters vs Blinds : How Graham’s & Son Can Help 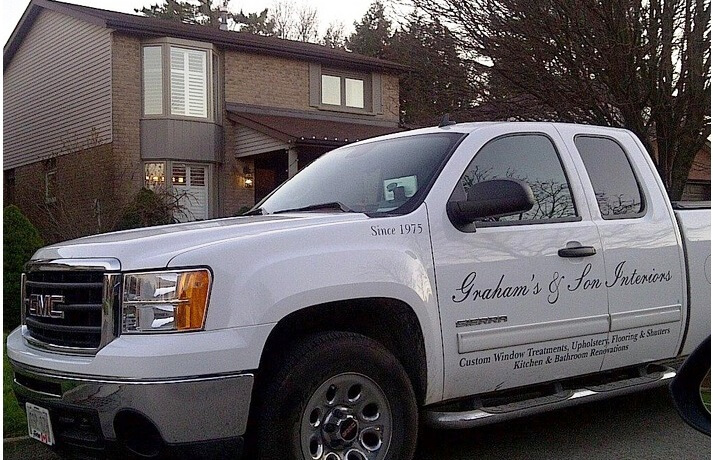 Graham's specializes in custom window treatments and they can even help you settle your shutters vs blinds debate.

1. Shutters vs Blinds: The Differences

While shutters and blinds are similar, there are a few differences. Let’s look at what each is first.

Shutters can come either as a solid or a slatted window covering. If they are solid, the shutters look like panels or boards, if they are slatted, they look like blinds. However, the slats are called louvres. Louvres can be adjusted like blinds to let different amounts of light in.

Blinds are horizontal or vertical slats that can be adjusted to allow different amounts of light in. They may be drawn open completely, either by moving the slats up to the top of the window or to the sides of the window.

The main difference between shutters and blinds is the way they are fitted to a window. Blinds are usually attached to the top of a window while shutters are fixed to the sides of the windows. Shutters are used both on the inside and outside of windows.

Fun Fact: people living in countries prone to hurricanes often attach hurricane or storm shutters to the outside of their windows so they can help protect their homes. 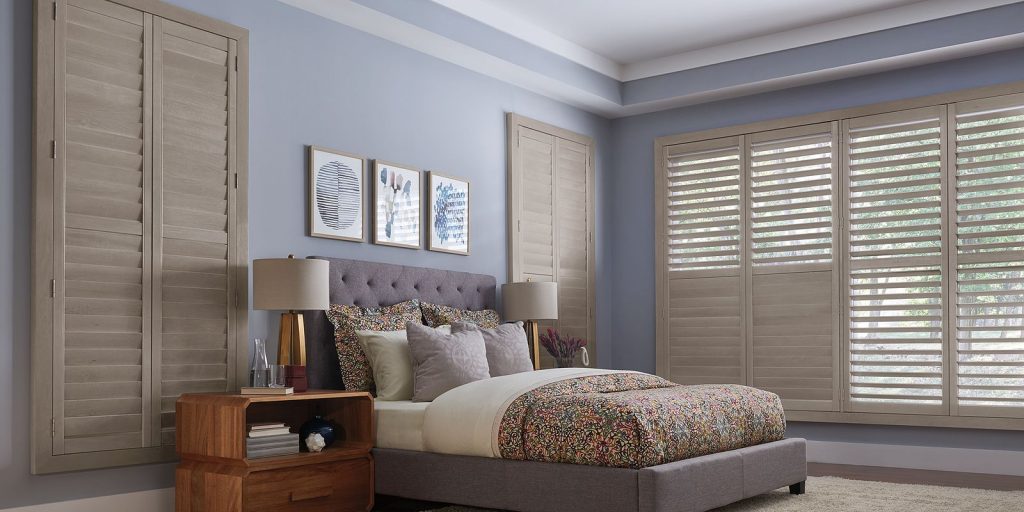 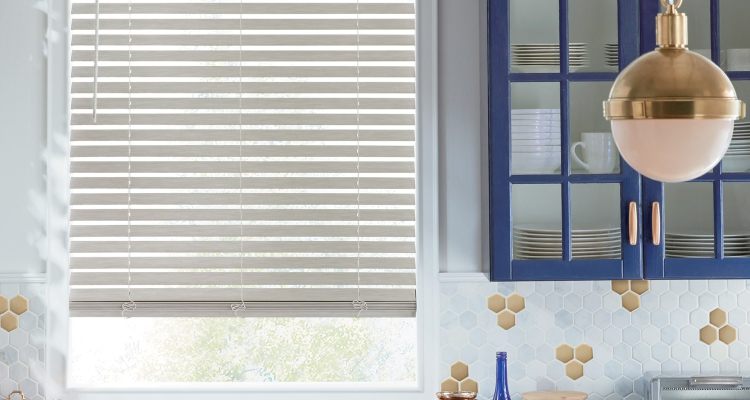 2. Shutters vs. Blinds: The Pros and Cons 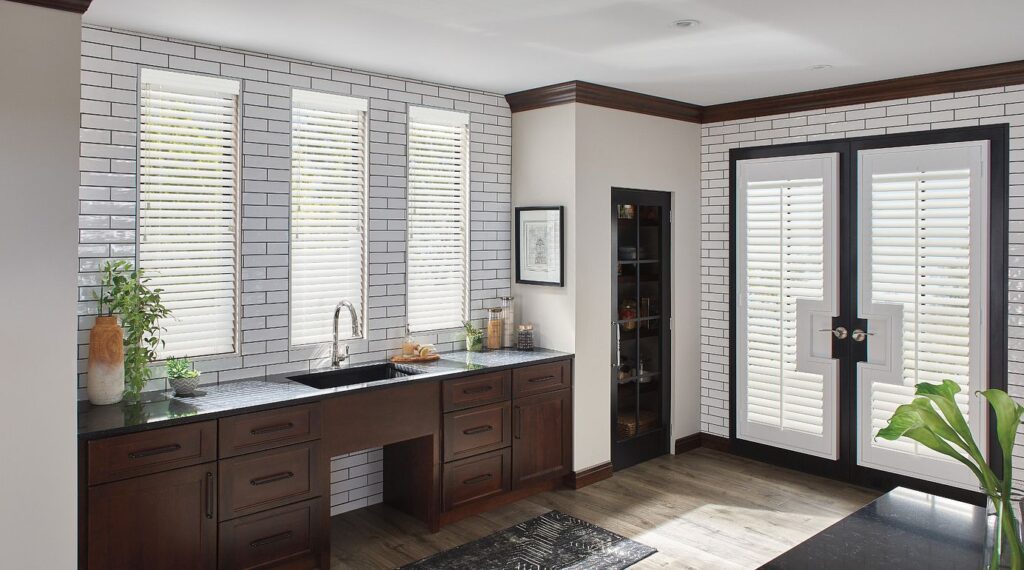 This picture features both composite shutters and blinds by Graber. (Image Source: Graber)

For the purpose of this article, we will focus on interior shutters. The two main shutters people purchase for their homes are Plantation Shutters and California Shutters. You can also order Specialty Shutters.

As mentioned, these shutters have larger louvres. They can come with 3 1/2″ louvres or even 4 1/2″ louvres. Plantation shutters are ideal for larger windows and rooms and are quite visually stunning. Plus, when these louvres are opened, you get a better view of the outdoors.

These shutters are given the name “California” because their louvres (the horizontal slats) are 2 1/2″. They are smaller than Plantation shutters which makes them ideal for smaller windows and rooms.

Specialty shutters are simply shutters that are designed to fit uniquely shaped windows. You can get shutters for eyebrow windows, arched windows or circular windows. Plus, you can order shutters for larger buildings with louvres of 6 1/2″, 8″ and 10″ sizes. There are many possibilities.

Take a look at our other blog post on shutters and talk to a consultant from Graham’s to learn more.

Many people prefer the look and quality of real wood shutters, however, some people choose faux or composite wood or even vinyl shutters that appear to be real wood. The nice thing about composite and vinyl shutters is that they have been specifically designed to resist moisture damage, sun damage and other wear. 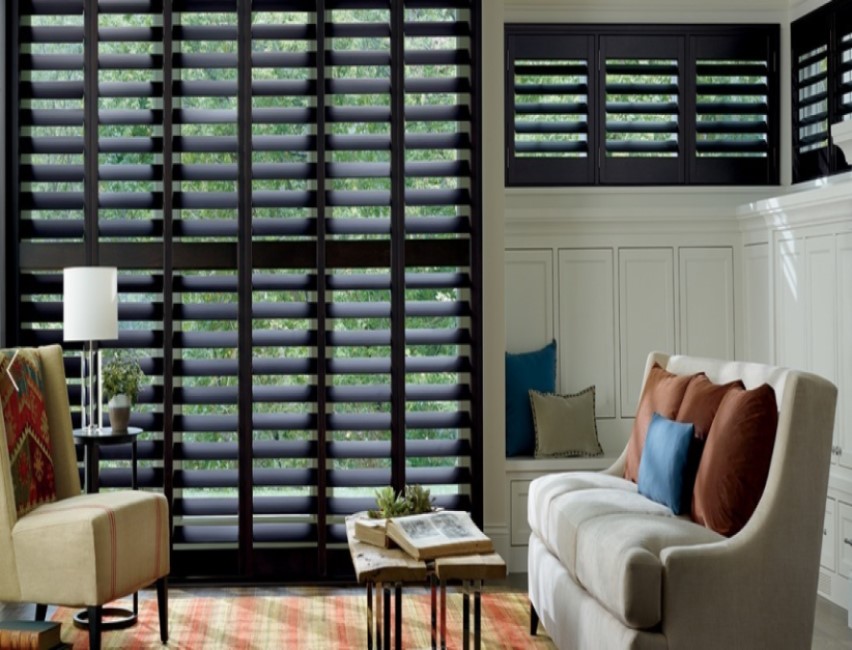 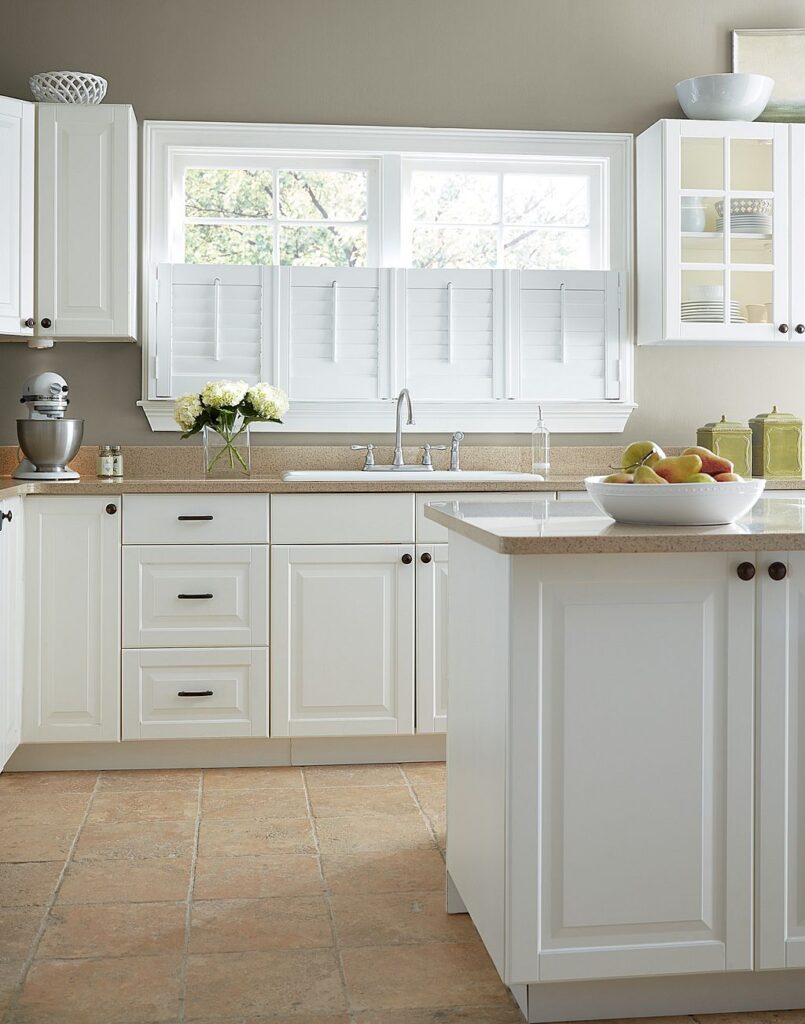 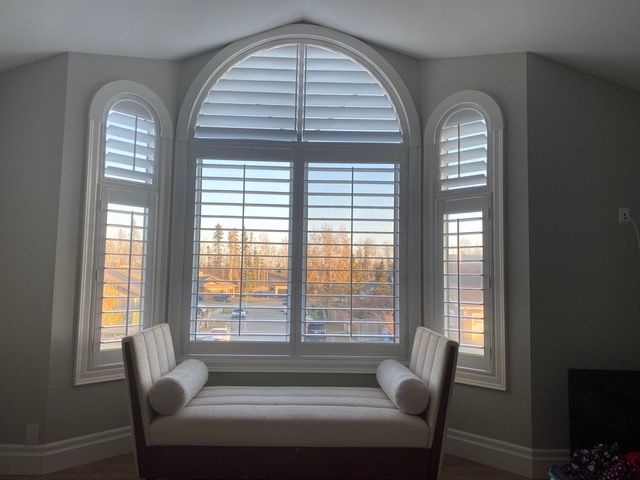 Blinds come in many shapes and sizes, but let’s begin by considering the 2 main types: horizontal blinds and vertical blinds.

Horizontal blinds can come with small or large slats and fit almost any size window; however, they are ideal for smaller windows since they may be tricky to function if they are too large, long or wide.

Vertical blinds are ideal for larger windows and patio or sliding doors. Like horizontal blinds, you can choose small or large slats. You can even choose panel blinds, which are large panels of fabric that function like your typical blinds

Blinds are so versatile because they come in a variety of materials:

With a variety of materials comes a variety of colours and patterns. You can choose blinds with a simple neutral colour or unique and trendy patterns. 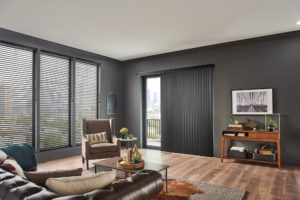 4. Shutters vs Blinds: What is best for you?

When it comes to shutters vs blinds, it’s really based on your personal preferences, your budget and your needs. If you want something more economical, you’ll want to stick with blinds. But that doesn’t mean you have to sacrifice style. You can get creative and choose a nice fabric or spend a little more and get blinds that look like real wood.

If you want to invest in your home’s interior and budget is no concern, then you may want to consider shutters. Their classic look hasn’t gone out of style; it’s really only the colours and finishes that factor into their popularity.

The choice is up to you – you can even mix and match. Spend some more on shutters in one room and save with blinds in another room. Also, if you need help with the choices, get advice from a trusted Graham’s consultant. They will help you narrow down what your needs actually are, what the current prices are, and what options will suit your preferences. Afterwards, you start your selection and have fun decorating!

5. Shutters vs Blinds : How Graham's & Son Can Help

With decades of experience, Graham’s can offer you sound advice. As a friendly and locally-owned business, they care about quality – quality service and quality window coverings. They will understand your needs, take care of all measurements and installations, and most importantly, they will ensure you are satisfied with the end results. Contact Graham’s for expert service.

"We want to thank everyone at Graham's and Son, for all of your efforts in working with us to 'beautify' our windows with your California Shutters. Service and communications have been professional, thorough and friendly, from start to finish! We are thrilled with the dramatic change the shutters have made throughout our home! The installation was so quick. The finished product is amazing and we feel like we are suddenly living in another home! We are thrilled with our Graham's and Son, experience! Thank you!"
- Wendy Brum
"A great family business, dealt with all of them - cooperative, patient, positive dialogue, easy to deal with... Always 100% satisfied."
- Blayne Rennick